How Does Temperature Affect Batteries?

High ambient temperature is the most important factor that influences UPS battery ageing and can cause premature battery failure.

Higher temperatures mean a faster chemical reaction inside the battery, which increases water loss and corrosion.

Valve Regulated Lead-Acid (VRLA) batteries have a rated design life capacity based on an optimum operating temperature of 20-25°C.

For every 10°C constant increase in temperature above this recommendation, it is generally accepted that battery service life will halve (reduce by 50%).

See the below image for an indication how rising ambient temperature can impact service life. 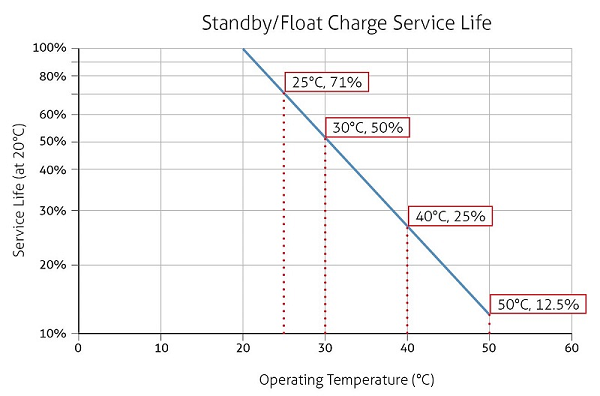 Without effective control of the ambient temperature around a battery set, the likelihood of a premature battery failure increases significantly. This could result in both a costly battery replacement and system downtime.

A UPS battery failure due to over-temperature can also lead to a complete system failure that only becomes apparent when the battery set is placed under load during a mains failure.

Batteries are essential for UPS correct functioning. In this whitepaper we explain the main important factor that affect their duration and we provide some recommendations for optimizing the UPS + batteries system, in order to maximize its lifespan and general availability.